So, I know I promised to finish posting about AJ Jacobs’ Drop Dead Healthy today, but I have a confession to make: I haven’t finished it. I thought this vacation was going to be filled with time to read (or at least filled with enough time to get through the last thirty percent of the book), but it wasn’t. Not at all. I think I had about ten minutes to read sometime last Friday, and after that, I didn’t pull out my Kindle once. 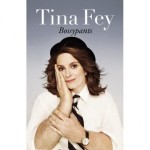 So how, you might ask, did I finish a whole different book while I was away? Well, folks, I’ll tell you. Bossypants was my first ever audiobook. I’ve heard bits and pieces of them over the years since my mother has been a faithful listener for about as long as the library has been stocking books on tape (CD…mp3s…), but I neither spend enough time in the car nor have strong enough auditory skills to have been tempted before this. In fact, I would say I have been strongly anti-audiobook, an oddity since I often complain about the fact that reading in a plane, train or automobile makes me horrifically queasy (and consequently, bored), but my love of the printed word is so strong that the audiobook felt like an almost tainted experience.

My husband has no such hang-ups. Although he’s also a newcomer to the world of audiobooks, the prospect of a 1600 mile road trip had him itching for something besides music and conversation to fill the long hours. I don’t blame him. We had two days of nine plus hours on the road (plus two days of six to seven hour drives), and after hour four or five, even we start to run out of things to say.

Enter Tina Fey. We are already diehard 30 Rock fans, and a good friend had recommended Fey’s memoir to me months ago. She had listened to it on her commute, and she said she found herself looking for excuses to drive around just to hear more. I was skeptical, but since the book is narrated by Fey herself, I figured it was a safe bet for us. One of the biggest additional bonuses from my perspective was that it had no plot to follow. I get bored easily when I don’t have any visual clues to keep me focused, and I was afraid that the combination of listening and driving would make it difficult for me to follow a more action oriented story, so Fey’s autobiographical short story-esque chapters seemed ideal. It was also only about seven hours long, so even if we got bored, we could get through it in one long day’s drive.

We didn’t get bored. I was only glad that we had switched driving duties by the time Fey began her chapter on beauty tips. I was laughing so hard that my head was stuck between my knees and I couldn’t stop crying. The tears were just pouring down my face. I’m sure I looked completely deranged, but I couldn’t contain myself. My husband helpfully pointed out that all the parts I found outrageously funny were the ones that described, almost in my own words, me.

Yes, it turns out, I’m about one-third Tina Fey…and I’m positive it’s not the third that’s the successful, well-respected comedian. No, no…

Once or twice a week I would set my alarm for six am so I could get up and plug in Hot Stix…I would study the curls in the mirror, impressed with both the appliance and my newfound ability to use it.

Then, without fail, at the last second before leaving for school, I would ask myself, “Am I supposed to brush it out or leave it?” Why could I never remember?! That feeling of “I’m pretty sure this next step is wrong, but I’m just gonna do it anyway” is part of the same set of instincts that makes me such a great cook. (pg unknown)

As I was relistening to this chapter to type out the quote, my husband, unprompted, popped his head out of the bathroom and said, “Hey! Isn’t that the part when we decided you’re sort of like Tina Fey?” Unfortunately, I couldn’t answer him because my head was back down on the table and I was laughing so hard I got the hiccups.

I loved this book. I loved listening to Tina Fey read it. I felt like I was reading/watching a play/listening to a television in another room and instead of bothering me, it was, well, delightful. I started getting grandiose ideas about listening to books while running much further than my usual three miles. I imagined the books I could review without having to put on my glasses or even get out of bed. Think of the sick days! The long hours in a cramped airplane seat that would simply fly by!

Maybe I’m getting carried away (but I have a fourteen hour non-stop flight to Australia next month that will be a solid test of my commitment). All I know is, libraries better start making it easier for me to download the audiobooks I want because my wallet cannot sustain a new book habit…certainly not one that makes it possible for me to read while doing all the things that used to get in the way of reading (cooking, cleaning, and errands, I’m looking at you)…

Tina Fey doesn’t have a website, but more information is available online.